The ClassOne Workstation is alcohol-wiped with a lint-free cloth and is double-wrapped in plastic at the factory prior to shipping. 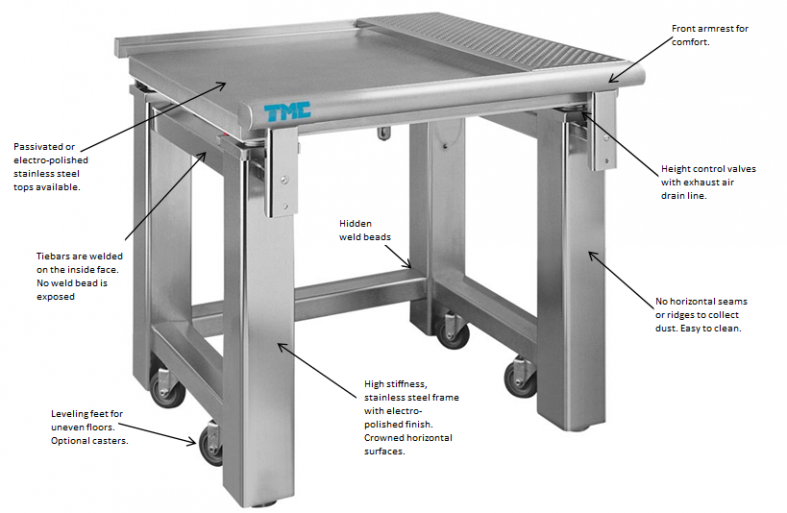 All CleanBench tables incorporate TMC’s Gimbal Piston Air Isolators as a standard feature. The Gimbal Piston has consistently shown to out-perform other air isolators in side-by-side testing. It offers outstanding low frequency vibration isolation in all axes and maintains its performance specifications even when subjected to extremely low input levels of excitation. Proprietary damping techniques allow the Gimbal Piston to stabilize relatively top-heavy payloads and quickly dissipate disturbances of the isolated table top.

The Gimbal Piston® Air Isolator provides outstanding isolation in all directions for even the lowest input levels. It is lightly damped and highly responsive to typical, low-amplitude ambient floor vibrations, yet achieves very high damping for gross transient disturbances, such as sudden load changes or bumping the top plate. The result is that Gimbal Piston Isolators provide superior isolation yet will virtually eliminate any gross disturbance within a few seconds. It can also stabilize isolated systems with relatively high centers of gravity without compromising isolation. The greatest challenge in designing an effective isolator is to maintain good performance at the low vibration amplitude inputs typical of ambient building floor vibration. Isolator specifications are often based on measurements done with the isolator placed on a “shaker table” with very high amplitude input levels. Such testing, with input amplitudes on the order of millimeters, yields unrealistic performance expectations and is misleading as results will not reflect the actual performance in use.

The Gimbal Piston Isolator design is unique in its ability to maintain its stated resonant frequency and high level of attenuation in even the most quiet, real, floor environments. The performance is linear to such low amplitudes because the design is virtually free of friction and therefore able to avoid rolling friction to static friction transitions.

Every other system that we have tested at levels typical for floor vibration exhibits either a higher resonant frequency than claimed or a substantial increase in transmission through the isolator mount.

We stress the importance of performance specifications at low levels because we have repeatedly observed, in our own testing and in many as-used installations, that better performance is much easier to achieve at greater amplitudes and higher frequencies. Our innovative Isolator allows a thin-wall, rolling diaphragm seal to accommodate horizontal displacement by acting as a gimbal. Instead of using a cable-type pendulum suspension, the Gimbal Piston Isolator carries the load on a separate top plate that has a rigid rod extending down into a well in the main piston. The bottom of the rod has a ball-end that bears on a hard, flat seat. The result is an inherently flexible coupling which allows horizontal flexure in the isolator as the ball simply rocks (without sliding or rolling) very slightly on the seat. The approach works extremely well, even with sub-microinch levels of input displacement, because the static friction is virtually the same as the rolling friction. Horizontal motion is simply converted to the usual vertical diaphragm flexure but out of phase: one side of the piston up, the other down, in a gimbal-like motion. 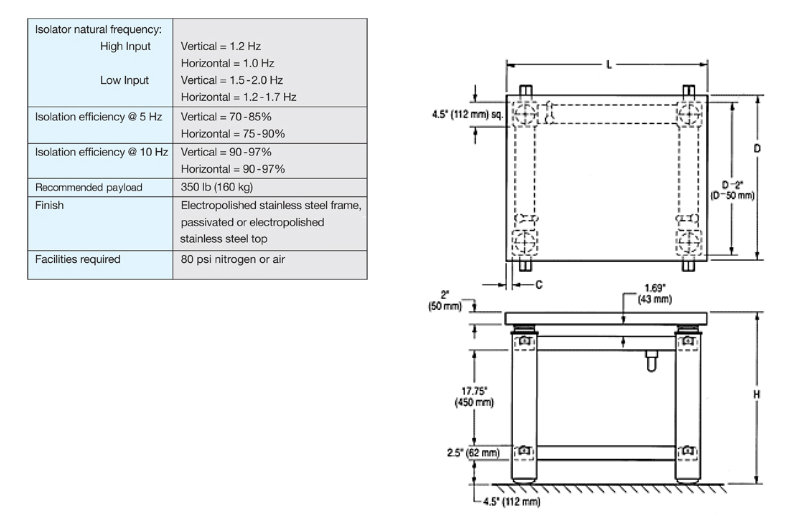 MSRP:
Now: $200.00
Was:
Accessories for CleanBench™ High-Performance Laboratory Tables Tables may be fitted with armrests and rigidly supported sliding side shelves just above the table top. The sliding shelves must...

MSRP:
Now: $1,059.00
Was:
Schott has raised the bar with the new flagship A20980 CV-LS LED Light Source. The next generation of SCHOTT LED Light Sources (A20980) breaks new ground for high efficiency output in a compact...